Home > Current issues > “Now is the perfect time for our new university to update our most important document, the university regulations.” Address delivered by Annika Nevanpää, Chair of TREY’s Executive Board, on Tampere University’s management system during a university community discussion.

“Now is the perfect time for our new university to update our most important document, the university regulations.” Address delivered by Annika Nevanpää, Chair of TREY’s Executive Board, on Tampere University’s management system during a university community discussion.

On Friday 26 June, the university community met up to discuss the University’s management system. Annika Nevanpää, Chair of the Student Union’s Executive Board, spoke in the event on behalf of us students. The event was organised at the invitation of the Board of Tampere University.

Read more in the University’s intranet, where you can later access the recorded version of the event. 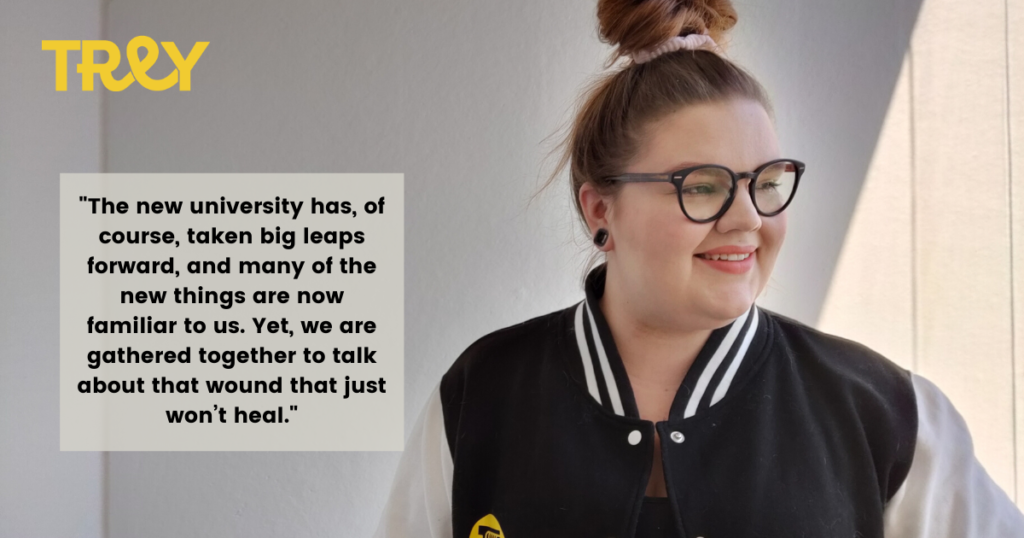 Address delivered by Annika Nevanpää, Chair of TREY’s Executive Board:

University board, rector and other members of our community:

These regulations and the whole process became a deep, infected wound in the leg of our new university. The wound is still sore and it will be for a long time if it is left untreated.

The new university has, of course, taken big leaps forward, and many of the new things are now familiar to us. Yet we are gathered together to talk about that wound that just won’t heal. We can’t just ignore it and hope that time will heal it. Because it won’t. Here at Tampere University, we have people who care about their community. These people want to and know how to heal that wound together. This is why we students call for a thorough and inclusive process to update the university regulations. This time around, however, we should be kept up-to-date and given enough time to give our comments.

In this university community, we are all equal. This is why I, as a student, would like to ask: why are there only four other students sitting next to me in the Academic Board, when the professors have eight votes and, if the chairperson’s vote is counted in, nine? And how do we justify the lack of balanced tripartite representation in the preparatory councils of the Academic Board? We students also have a strong will to make this university the best it can be. Even if we have the least power, we are the largest group in this community.

However, we are not the ones who have the least say in this community. It is those people who cannot participate in Finnish who have the least say in matters. While our official administrative language is Finnish, this does not, in any way, prevent the administrative bodies from being truly bilingual. I would like to thank the members of the Science Council for your bilingual efforts. If anyone who has the slightest power in any working group is listening, I encourage you to think how you could let all the voices of your community be heard. At the moment, we are categorically shutting out a huge percentage of people from our community’s decision-making just because of their language skills.

This event was called ‘a discussion on the University’s management system’. A few years ago, when I was in charge of educational affairs in my subject association, I had never been told that students have no place in the different bodies of our faculty. Nowadays, this is a reality in the faculties’ management groups. The different parts of our community are drifting apart. The principle of subsidiarity may not be a shortcut to happiness, but if we want to review the management system, I would like to mention this principle as a primary concern. Students should be able to make decisions on matters that concern students.

As a student of administrative sciences, I would like to conclude by saying that documents are the ones that rule the world. This is why we cannot discuss the management system without discussing the university regulations. Right now, we are not facing a merger that would force us to rush through things. Now is the perfect time for our new university to update our most important document, once created for us by a temporary administrative body.