Indeed. If there is something I’ve learned during my 24 years under the sun and stars is that there is always something one wishes to accomplish whilst wondering around trying to find a meaning for this thing called life. However, as I’m not a poet or artistic in any way, I am unable to provide an answer for that question. Sorry (kinda).

I’m pretty sure every one of us has a bucket list. You know, the “before I die” – kind of thing. Even I have one and my list includes (but is not limited to) visiting Tomorrowland and the Maldives (before they sink, thanks global warming). However, these types of things are quite common, and pretty much every one of us has some place he or she would like to visit. Not too often do we stop to think about ourselves, and what are the things we need, but don’t realize we need. Typically, the Finns are not too flamboyant in their every day lives. That is unless the Finnish hockey team happens to win gold at the world championships. What I’ve noticed is that we should be prouder of who we are and what have we accomplished.

I still remember the day when I moved to Tampere from Jyväskylä, where I had lived for 21 years (or in other words, my whole life). One of my best friends was helping me move and once we had loaded all my belongings to the van, I jokingly asked if he’d like to come help me offload the furniture in Tampere. For reasons beyond science, he said “sure, why not”. The whole car ride to Tampere was silent. Not sure what my friend was thinking, but I was going through what I had done in my life, and what I had accomplished and experienced. More precisely, what my friends has experienced that I had missed. It was right then and there that I decided I would live my life in a way I had never lived it. This would later on include a bunch of after hours “Sure, why the hell not.” comments, a bunch of “Are you sure this is legal?” and oh, so many “Dude, I’m not sure if I’m going to survive for my 8 A.M. lecture, but let’s worry about that some other day.” I’m safe to say this was the best call I’ve ever made. The people I’ve met in my years of studying are the best. There is no question about the fact that Tampere is the best place to study and live in. The community we have here is something that cannot be put in words.

Every summer I envy the people that can afford to travel around the world and see all these miraculous places that I have never even heard of. I think I have finally come to terms with the fact that “The Bank of Dad” is not going to pay for my one-week shitshow in Ibiza when you have passed the age of 23. But one thing it has taught me, though, is that nothing comes easy. I’ve only worked as a cashier in my life for some years, but it has been a position I’ve learned a lot from and it has helped me to pay the bills more often than not. I still feel very happy with my life, and I have found out that you actually don’t need to travel the globe every two months. I call this the Titanic-theory. (SPOILER ALERT) In the movie “Titanic” the ship sinks. This, though, has nothing to do with my Titanic-theory, as it has to do with the fact that the best parties and atmosphere could be found at the third-class level. They made do with what they had, and that is something “the Bank of Dad” is unlikely to provide you with.

Happiness comes from the people around you. The people I have become friends with are not the type of people I would have friended while living in Jyväskylä. I can’t provide an answer as to why, but this is the case. There are so many people and personalities (some people have several personalities but I’m not a doctor either) that there are friends for everyone. Maybe more. Currently, I think I might be the happiest I’ve been in a long while. This is due to a handful of people, but every single person I’ve met and talked to, has somehow influenced my life – be it in a negative or positive way. The people around you make for who you might become.

The way I see the world is via my motto, which is “Motivated by fear of being average.” The motto is not at all stolen from a Dutch DJ’s Instagram caption and anyone who claims this is wrong. I try to apply my motto in my everyday life in any way I can. This relates to the Finnish way of being reserved. I also frequently apply the WGS – technique (Who Gives a Sh*t) and the results can speak for themselves. Being self-confident doesn’t mean that one must be a narcissist. It means that every single accomplishment you achieve, is a small tick off your bucket list, on your way to prosperity and happiness. Never forget who you are and why you do what you do. There is a world out there seeking for individuals such as yourself. Be the best version of yourself.

Dear future historians… is a song by a British band called “Enter Shikari” which inspired this blog. Beer had nothing to do with it. 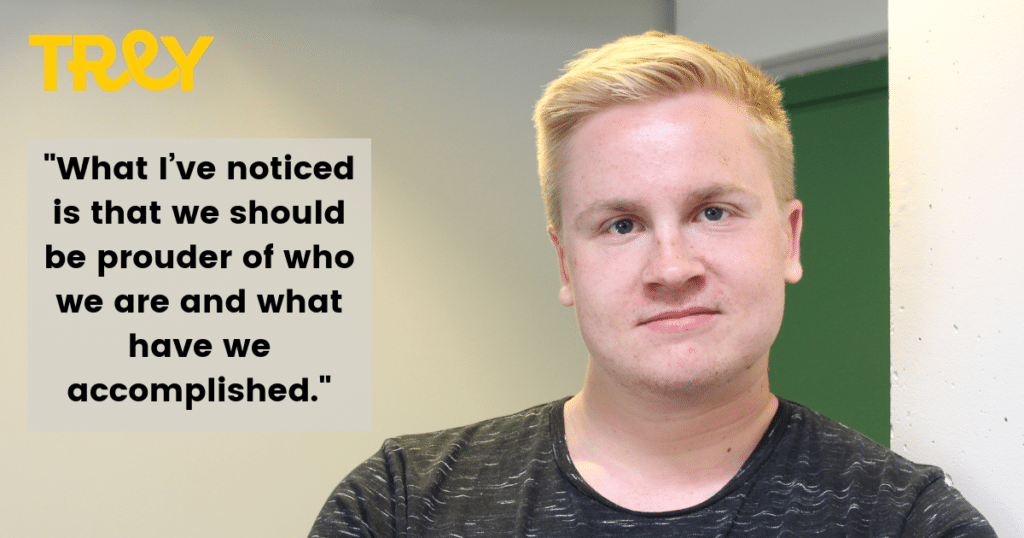