At the beginning of the year, we begun to build a new event concept for TREY called TREY Topics, with the theme “Responsible Results”. Before this, TREY’s event field didn’t really have anything to offer for those interested in big societal questions and topics. As I’ve been organising the event, I’ve begun to pay more attention to the concept of responsibility and how it shows around me. I will write about it now.

Responsibility is present everywhere. When the media covers phenomena such as climate change, the ageing of the population, the future of the welfare state, political conflicts or refugees, the concept of responsibility is always at the centre of it. Who it belongs to, who carries it and how it is carried are all relevant questions that everybody has an opinion on, albeit not always very well-founded.

In public discussion, there is a clear preference for giving responsibility over taking it. The burden of solving all the problems in the world is thrust especially upon the shoulders of young people. Are you a childless student? Irresponsible, the pensions crisis is your fault. Do you demand the decision-makers to react to the climate change? You should go back to school like a proper innovator because it’s the responsibility of your cerebral cortex to conjure up the dei ex machina to overcome global disasters. Are you an able-bodied 20-year-old running from a war? It’s your responsibility to go back home to nothing to build a new life without a job, a country or people you know because longing for a better future means living off of others and causing the western world order to collapse.

What if the responsibility for huge societal challenges is actually a more complicated and considerably more collective phenomenon than you would think based on the youth-blaming discussion? And what if thrusting all this responsibility on the shoulders of the youth in a stage of life where they need to take responsibility for their own lives too is too much for us? 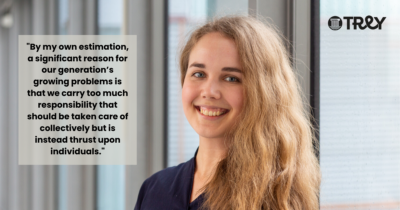 The public discussion is swarming with all kinds of banal contemporary analyses for the increasing mental health issues of the young people. Most seem pure conjecture: you take any phenomenon that has become widespread at the same time as mental health issues and draw a causal relation between these two things. Whether we’re horrified by social media-induced anxiety or by the information overflow that destroys our ability to concentrate through smart devices. Sometimes it gets even more unscientific when someone rushes to point out that the new generation is all the more fragile and selfish and weaker than the previous ones. I will refrain from commenting on the credibility of this explanation. Instead I will mention that the increasing mental health problems are readily blamed on any phenomenon or group of people that the speaker doesn’t like.

By my own estimation, a significant reason for our generation’s growing problems is that we carry too much responsibility that should be taken care of collectively but is instead thrust upon individuals.

Cases recorded as depression, anxiety or sleep disorders hide a lot of issues that a mere diagnostic code doesn’t reveal: stories about workload that has grown too heavy or excessive challenges with combining other life and studies. As of now, you can’t get a sick leave for “just” a burnout, so when a student crumbles under a workload, they get sent home with a whole other diagnosis. I believe that a FSHS service unit is the place where the responsibility that has grown too big and too individualised often first shows. It’s just that there it hides behind a medical diagnosis.

It’s a tricky thing. Study burnout shouldn’t be handled as an individual’s health problem. If a quarter of students get burnt out, depressed or anxious during studies, it’s not that a quarter of us would need medical help for mental health to start with. It’s about something else. Either you don’t get enough support in studies, you have to complete them with a schedule that’s too tight, there’s too much study-related work or concentration into studies is disrupted by a weak income. Sometimes burnout is a combination of all of these and then some. What’s common about all these issues is that they’re not medical in nature. They’re about collective matters: educational affairs, rendering studying possible. About responsibility that can never be simply on one student’s shoulders.

It’s wrong for the use of health care resources that we seek help from doctors for problems that don’t have medical reasons. And it’s wrong for our self-esteem and mental health that we consider issues that could be solved with the structuring of studies and work to be individual health problems.

As a side note I would like to say that I don’t find it at all surprising that it’s hard for us to see behind individuals’ symptoms and recognise the problems that we could carry the responsibility for together. Placing responsibility on individuals is such a persistent trend in our midst. As a good example, we have the demographic change in relation to the birth rate discourse. Even though it’s undoubtedly certain that even previous generations were pressured into having kids, it’s a new phenomenon to blame the youth for how without a communal effort to raise the birth rate, the whole community suffers and the welfare state collapses. Sometimes I wonder if it’s really true that we have such few means to handle the problem. Is blaming the youth the last resort to ensure that the boomers have dignity when they’re old or that the future generations have a planet they can survive on?

You would think that the we, the world’s highest educated nation, could do better.

Unfortunately, we people have the habit of internalising things we hear around us constantly. Maybe for this reason such a big part of students takes or at least allows more responsibility on their own shoulders than would belong on them in a just world. I’ve met people who have chosen their fields based on what they think will be the most efficient way to interfere with the current global environmental crisis – and have because of that not reached for their other dreams. I know young activists and politicians who constantly balance on the edge of burnout to achieve at least some small changes for a better world. I also know people who have postponed having kids because of climate change or given up the thought entirely. These are big, difficult and respectable personal sacrifices – but at the same time it’s extremely sad that the responsibility and pressure for these societal issues isn’t shared more evenly.

I’m absolutely not suggesting that anyone give up the responsibility that belongs to them or that they think of as theirs. Quite the contrary: carrying responsibility for your environment, your life and your loved ones is extremely rewarding end educational, especially when you do it within the limits of your well-being. Still, I would hope that as a society, we would learn to view the problems we have in common as issues that require common solutions. And that we would learn that each and every thing we stress about or carry the responsibility for alone isn’t best solved by crouching even more under the weight.

As closing words I’ll say that I’ve never warmed up to our university’s slogan: Human Potential Unlimited. The potential of one human to solve anything is quite limited in the end. Whereas people – in plural – have rather unlimited potential indeed.