As Christmas inevitably inches closer, so does the first year of TREY. I have had the honor to serve as the first chairperson of the Student Union, and it has been a task I will never forget.

The student scene in Tampere was living through exciting times a year ago. Lights were switching off at two student unions and the board of the new student union was already hard at work due to the transition period. Very basic matters were on our minds: Would we be able to pay out salaries in 2019, would students be able to order their student cards and when would we have our laptops and e-mail addresses in working order.

Things were moving one at a time – the laptops finally arrived in March and the focus shifted on building a culture, the bases for advocacy work and the community spirit.

The many steps taken during the year have led us towards a student union which represents students and advocates for matters important to them.

The Student Union of Tampere University is by no means finished. The student community has had a lot of critical discussions throughout the year on a variety of matters. The questions raised have dealt with, for example, the Student Union’s events, the benefits and usefulness of working groups for associations, and whether TREY deals with subjects such as the university building process, student income or climate change with enough vigor and the correct tone of voice.

I find these discussions extremely important, even if they involve difficult subjects. It shows that TREY’s activities matter and people find it worth developing. Enduring the inevitable unfinished nature of the newborn student union has at times been a burden on all students – I thank everyone for their patience this year.

During the year, a huge amount of important work has been done for the relevance and inclusivity of the Student Union. This work has occurred not only at TREY’s office, but in the Council, in committees, in sections and in student organizations. The year has contained more advocacy victories than I ever had the nerve to expect from an organization which is barely a year old. We also made a wonderful Wappu happen, only setting the stage for the adventures to come in the future and we were in close cooperation with subject associations, advocacy associations and recreational associations.

And I did not even mention how much this year has given me personally! My tasks have taken me to be interviewed on morning TV and to meetings where I have led the conversation about our community’s values with the university leadership. At times we have met with parliamentary candidates and MPs to further the students’ cause, sometimes we have held hilarious checkpoints for freshers in their events. Each day I have been surrounded by a group of talented and amazing personalities: our lovely board members and our wonderful staff, not to mention all the new and familiar faces I have come across!

I know that TREY will continue to offer great opportunities for influencing common matters, for developing oneself, for learning something new and for meeting new people. After all, this is why the student union exists – it brings students together.

I warmly encourage everyone to hop on board – whether your place is in the events section, Council or just in the discussions had on the campuses on common matters. In this community, each voice matters. 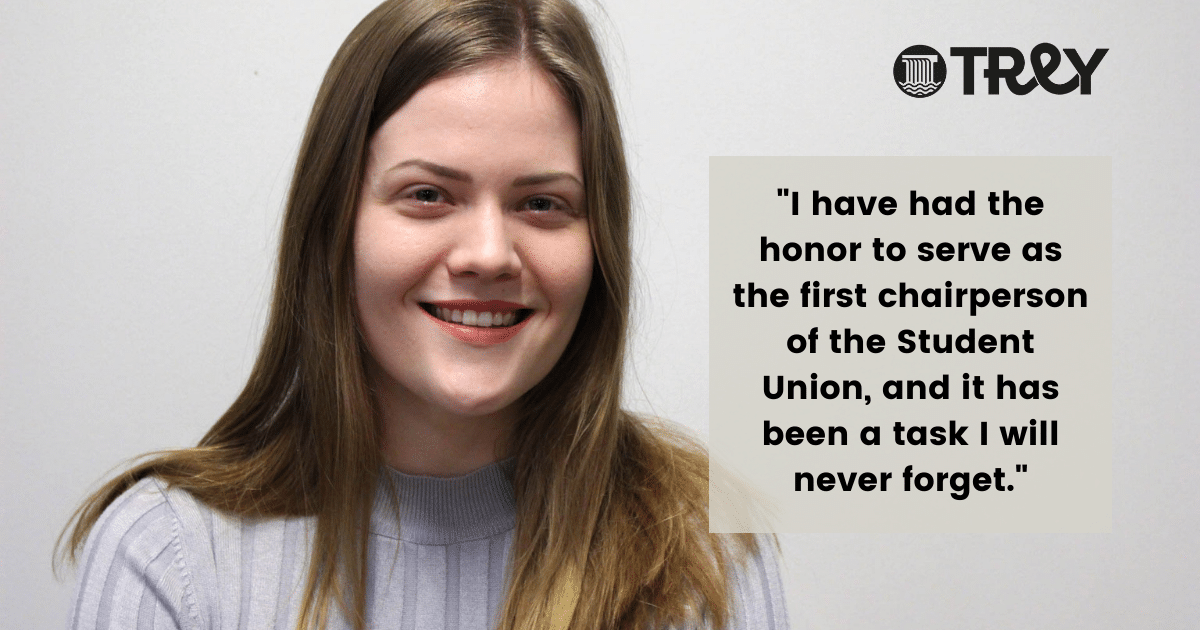 I would like to conclude with the most moving moment of the last few weeks of my year as the chair. In April 2018 I took part in a meeting with the personnel of TTYY and Tamy where we discussed what we could promise to each other and our members during the merger process.

”I promise to look after the well-being of our offices and communicate about unfinished matters.”

”We promise to maintain the high level of advocacy in the new student union, as well.”

”We promise to value the diversity of our members.”

”We promise to create something brand new, while simultaneously respecting the old traditions.”

Phrases such as these were written in the promises which were handed out to each board and staff member to remind them what is ultimately most important in the hassle of everyday work.

When people from TREY’s office was visiting our old office in Pienteollisuustalo the other day, one staff member who was part of the merger process came to me with a note containing those promises.

At the end of the year it is easy to agree. So we have.