The council of the Student Union of Tampere University had a meeting on 28 April. In the meeting the council agreed on the last year’s annual report and financial statement and granted discharge from liability for Sajaniemi’s executive board and Secretary General Venla Monter. 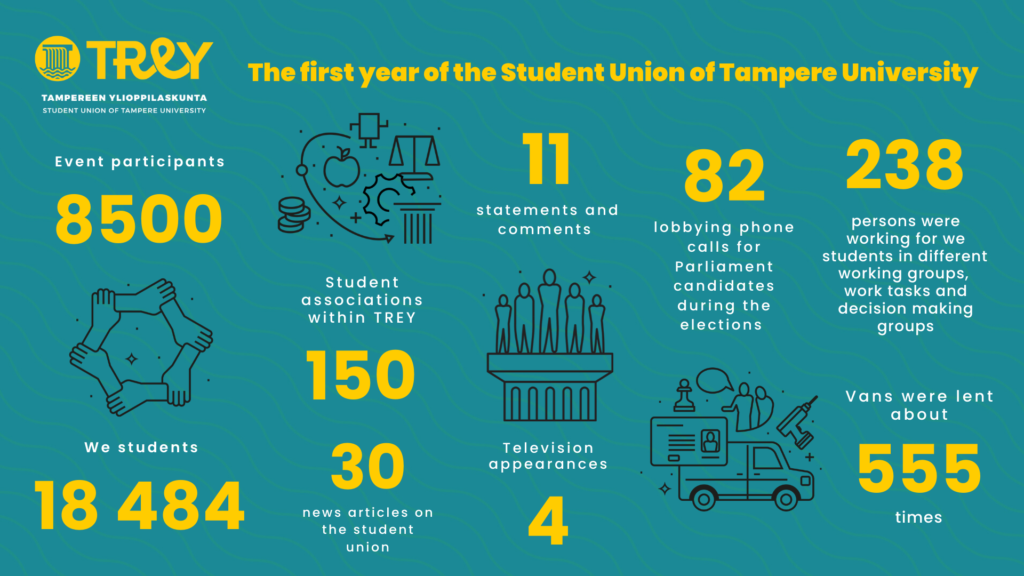 The main objectives for TREY’s first year were to create new student culture, to build good relations with stakeholders, to institutionalise advocacy work and to establish working procedures. During the year 2019 there were 238 persons who advanced these objectives in different working groups and positions!

Building a community was a cross-cutting theme in each sector. Our students’ diversity and associations played the key role in all operations and the planning of new activities. Also, the advocacy work was planned by taking into account the diversity and associations. The students influenced on the matters concerning them by providing comments to statements, answering different surveys and giving feedback. Moreover, different working groups were established to work on different topics, such as tutoring, corporate relations, communications and educational affairs.

Equality was an important topic for the student community in 2019. TREY aims to create an equal student culture. In 2019, TREY issued an equality plan, provided training sessions on equality and started equality work with the associations whose memberships is not open for everyone.

Student tutoring and a significant number of events also played an important role for our community. During TREY’s first year, a framework for tutoring was created: consistent applying rounds and procedures as well as trainings organised together with the university were steps towards equal and quality tutoring. The biggest Wappu in Finland included more than 100 events during the two weeks. In addition to Wappu, TREY organised an event on Shrovetide, downtown orienteering for the first-year students, two conferences on educational affairs, Wellbeing Week, two International Weeks and different Appro events. We students also participated in the opening event of the university and organised TREY’s first annual celebration. These events had more than 8 500 participants altogether.

The student union as an influencer

During its first year, the student union created a framework and procedures for its advocacy work. TREY’s advocacy work aimed to influence the decisions and policies of Tampere University and the City of Tampere. Advocacy work was also done at the national level, focusing on the matters important for students. The student union’s role as a future-oriented community builder received a lot of attention. The relationships formed with the university leadership reinforced the advocacy work, and the chair and other members of the executive board met with the president on the regular basis.

In 2019 we worked on the development plan of education and learning, the university’s information system and made a statement on the equality in the Tampere University’s board. In addition we students expressed our views on free education at the secondary level, the budget of the Finnish government as well as on matters concerning education, subsistence, climate and mental health. The student union was active within National Union of University Students in Finland (SYL) and its general assembly, in which Paavo Antikainen, vice chair of the executive board, was chosen to the SYL’s board for the year 2020.

The associations played a key role in the advocacy work. The student representatives in the university administration and active members of the associations participated in various meetings, trainings and events; they were also supported in advocacy efforts and close collaboration with the faculties. The staff of the student union supported students on a daily basis by offering advice and help in matters related to studies, housing, well-being and subsistence.

Student media group prepared the establishment of the student media. The council of representatives decided to establish Tampere Student Unions own student media in their meeting in October.

The year 2019’s operatives prepared many guiding documents for the Student Union of Tampere University. These include badge usage policy, communication strategy, environmental plan, financial policy paper, the principles of bilingual communications and different handbooks such as advocacy and brand handbooks. You can get to know all the public steering documents in TREYs website here.

The student union also focused on well-being at work and the sense of community within the office.

“The student union of Tampere is an unique and diverse group of students. During our first year of operations we have shown our ability to discuss important themes for students, celebrate our successes, show each other support, have fun and create a great place for our student community in Tampere. TREY will continue to support this community and its goals in the future with never ending effort, ambition, open mindedness and with a twinkle in our eye.” – The first chair of Tampere student union Paula Sajaniemi