The council of the Student Union of Tampere University had a meeting on 28 April. In the meeting, the council agreed on the last year’s annual report and financial statement and granted discharge from liability for Nevanpää’s Executive Board and Secretary General Venla Monter. 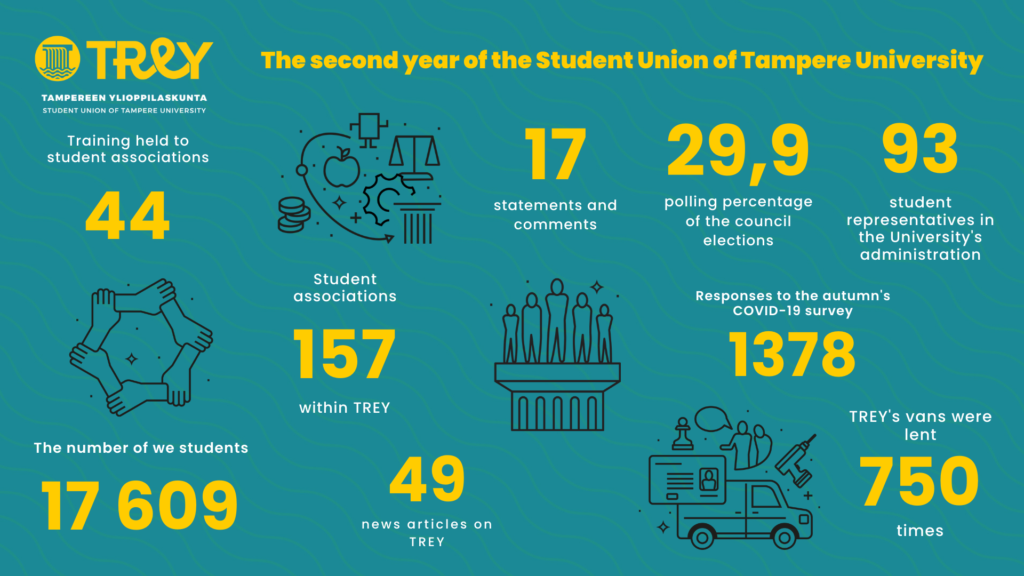 The action plan is a document guiding the activities of the Student Union, and it determines the priorities of the Student Union’s activities for one year at a time. TREY’s action plan for 2020 consisted of seventeen action plan projects, which addressed, among other things, strengthening our community, developing tutoring, accessibility in communications, building our volunteer field and the expansion of FSHS. In 2020, TREY’s second council elections were also held, which was one of the highlights of the autumn!

Despite the pandemic, our community took significant steps forward, and supporting organizations and tutors, in particular, played a significant role in 2020. The facilities of student associations were promoted especially on the city center campus, and TREY provided financial support to student associations for a total of EUR 80,000 in operational grants and almost EUR 55,000 in cultural and internationalization grants, which were granted in cooperation with the University. In 2020, equality and internationalization in associations and the consolidation of the role of sports organizations in the student associations field were important themes. The development of TREY’s volunteering took steps forward, and work regarding working groups and volunteering will continue this year.

Before the COVID-19 pandemic in 2020, we had time to organize two major events: a training event for student association actives, Associations’ Kick-off, and TR3fest, a party event organized together with Tamko. Wappu was canceled in the spring due to the worsening COVID-19 situation. In April, the Remote Wappu social media campaign was held, and it included various daily challenges on social media platforms. The campaign was really popular and gathered a lot of new followers for Wappu’s own Instagram account @suomensuurinwappu. Remote Wappu and Autumn Wappu, designed for the fall, sparked interest in several media outlets. Unfortunately, Wappu could not be organized live at all, so the only implementation of Wappu in 2020 was the Remote Wappu campaign. In the autumn, a flag ceremony event was held, in which TREY’s flag and the chair’s chains were introduced.

Despite the COVID-19 situation, TREY’s role as an influential Student Union was also strengthened, and TREY took an active role in many educational, social and international issues. At the local level, especially the need to assess the University’s management system and the functionality and development needs of the University Regulations was a strong theme throughout the year. The Sisu-reform in autumn was a particularly large project in terms of communications, in which TREY was actively involved from the beginning of the year. TREY’s own advocacy news concept, TREY News, premiered in February 2020 with a Sisu-themed series premiere episode.

Annika Nevanpää, Chair of TREY’s Board, was elected as the President of the National Union of University Students in Finland and Ville Jäppinen, Member of the Board, was elected to SYL’s Board, and TREY was the most influential of the Student Unions in SYL’s General Assembly. TREY was also strongly visible in the media at both the local and national levels, and news articles were made especially about the themes of the pandemic, Wappu and equality work in student associations.

The COVID-19 pandemic brought a new cross-sectoral perspective to the Student Union advocacy work, and TREY actively contributed to the advancement of student status and well-being during pandemic. TREY communicated actively regarding the situation throughout the year and particularly influenced the University’s corona policies in various working groups and institutions, such as the pandemic group of the Universities community. In the fall of 2020, TREY conducted an COVID-survey for students, which mapped students’ well-being and ideas about the remote realization of teaching and community. The results of survey were widely presented in various working groups and institutions of the University, and they were utilized in the advocacy work done by TREY.

After the first year of TREY, the activities of the Student Union gradually began to stabilize, and the consolidation of various practices and traditions into our student community was a strong part of the 2020 plans. However, due to the COVID-pandemic, the daily lives of students changed completely, and we had to find new ways to implement and complete studies, maintain community, and carry out organizational activities. Autumn’s elections of the Council of representatives shifted from a lively election market and candidate encounters to online markets and panels, and the seated Council met primarily through Zoom. In 2020, the activities of the Council were developed and a guide for the Council was drawn up to support advocacy work. The culture of orientation of the Student Union’s actors was further developed, so that working in the Student Union would serve those applying for the Board, the Council of representatives or working groups, for example, as well as possible.

In addition to consolidating practices, the Student Union also underwent reform work in its second year of operations. TREY’s website was brought into line with the EU Accessibility Directive, the largest communication project of the autumn, which is of huge importance for students’ equal access to information relevant to student life.

The Student Union office moved to the main building of the Hervanta campus in late February, and the moving boxes had yet to be dismantled when the Board and staff members switched to remote working, which is still going on to this day. The new office at the center of the Hervanta campus will hopefully be a prominent place for encounters and advocacy work in the “new normal” of the future.

The second year of operation of the Student Union of Tampere University was something completely different from what anyone could expect. Nevertheless, our unique student community managed to show what the student culture of Tampere is all about: extreme creativity, perseverance, and sharp advocacy work. In times of crisis, cooperation is power, which is why I am proud and delighted to have experienced this year in the TREY community. – Annika Nevanpää, Chair of the Board of the Student Union of Tampere University 2020  TREY’s Board of Directors 2020