It’s a summer evening in August 2019. TREY’s office in the back of Rakennustalo building is quiet, as most have already gone home after a day’s work. However, me and my co-worker Petra are still there, for we have an important task: to get excited about the Intranet. The first common Intranet of Tampere University would soon be introduced to students, and our task was to implement instructional videos, which would make it easier for students to get to know the Intranet. “Let’s go on an Intranet adventure”, Petra says in a radio voice while introducing the front page of the Intranet prototype to the recording. Attempts are being made to create enthusiasm and hype around the introduction of the new system – after all, it is one of the first common systems of the new University.

The introduction of a new system is a big change that requires continuous feedback-based development work from the organization as well as long-term communication. The system must be functional, accessible to all users and intuitive to navigate – and there is no harm in a pleasing visual look. In the face of system change, the user is hoped to have a receptive attitude, patience, tolerance for incompleteness, and willingness to provide feedback to improve the system.

The first version of the Tampere University Intranet gathered the University’s news and handbooks in one place for the first time. However, there was still a lot to develop: the search function did not work in a way that would serve the user, and if you wanted to find information on the Intranet, you would need to be very precise with the words you used to find what you were looking for. Most of the time you didn’t find that, at least not quickly. Fortunately, the search function was developed quickly. Users wished for the Intranet’s visual look to look more clear and easier on the eyes, and shortcuts were at the top of the wish list. Based on feedback like this, the Intranet has been developed over the years. Still, there has been a recurring concern about whether the Intranet would really reach students. 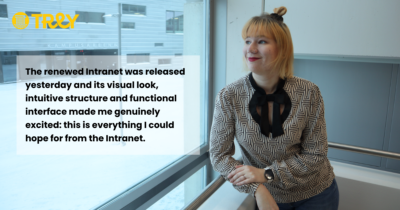 A reachable and consistent Intranet that would really excite the user is the ultimate goal, but when will it be achieved? When I tested a new prototype of the Intranet in May last year, I felt in my heart that it could happen soon. Built on the prototype I got to test, the renewed Intranet was released on 27 January and its new visual look, intuitive structure and functional interface made me genuinely excited. My feedback on the prototype I tested was short and concise: “This is everything I could hope for from the Intranet”. The University has clearly taken into account all the feedback about Intra and has now brought a reform that, I dare say, will genuinely excite and increase the utilization rate of the Intranet. I wish you open-minded adventures in the new Intranet, as well as willingness to give feedback to make it even better!

The author is TREY’s Specialist in communications and advocacy and has been excited about the many intranets of Tampere Universities since her own studies starting 2013.