Even though the autumn is just beginning, and leaves on the trees are still mainly green, the planning of TREY’s action for next year is already off to a good start! In August, we asked for initiatives from the student community regarding next year’s plan of action, budget, and events calendar. The ideas we received were exciting, at least for yours truly. Some examples of the themes that emerged in the initiatives were students’ mental health and loneliness, support and training for student associations and student representatives, and development cooperation.

We have been envisioning the activity for next year among board members and employees at TREY’s office as well. In addition to this, in the beginning of this week the Council of Representatives had their own workshop where they had the chance to dive deeper into both the community initiatives and the ideas from the office. We have asked ourselves the most important question: What are the actions we need to take next year in order to help our community recover from the pandemic, strengthen the status of students in the aftermaths of it and restore student culture to its former glory? 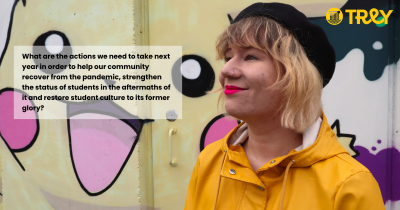 This year, the Council of Representatives plays an even bigger role in the planning of action, which is a good direction to take. For myself, this is the second year that I am in charge of the action plan process, together with TREY’s chairperson. I am excited about the fact that every year we are able to develop the student union’s processes to be more effective, to encourage more participation and to create a strong sense of community. The discussions that the council members had about TREY’s development and direction in the upcoming year at the workshop earlier this week filled me with pride and joy. I really feel like the student union is being built and developed through the power of community, and it is a great feeling!

The writing process for the first draft of the action plan began this week. The process consists of writing the ideas down on paper for the first time, as well as clarifying the main points: which ideas end up in the final plan for the year, which become continuous parts of the student union’s action and which are set to the side for now, to wait for the right time? The wonderful part of throwing ideas around starts to turn more concrete, which also means that some things need to be let go of. Luckily, we have lots of diverse material in our hands and there’s no doubt that we’ll end up with a well-balanced result that will have a positive impact on students’ lives. A second draft of the action plan will be open for comments in mid-October, and we hope to then receive more opinions from the community on the ideas we have on the table. I am really looking forward to seeing how it all turns out and what the final version of the action plan will look like, when presented to the Council of Representatives in the autumn meeting in late November!

– Saana, Specialist in Communications and Advocacy, a dreamer and a fan of processes