Today is the Day for Free Education.

Free education has been one of the cornerstones of the Finnish education system for a long time. Lately, we have seen an increasing number of proposals to limit free education. We took our first and worst hit in 2017 when Finland implemented tuition fees for students from outside the EU and the EEA, but various fees for Finnish students are also regularly discussed. Just last week, Finnish Education Employers (FEE) announced their parliamentary election objectives  which include a proposal for making a second higher-education degree subject to tuition fees. Not long after, a blog from the Technology Industries of Finland proposed tuition fees tied to study credits.

In addition to tuition fees, the costs of getting degree student status have been on the surface. Over the summer, Tampere University decided to implement a study-based admissions track into the Science and Engineering degree programme. The track studies are subject to a tuition fee. Overall, the role of the open university track in admissions is increasing, and this is understandably concerning to the student movement. 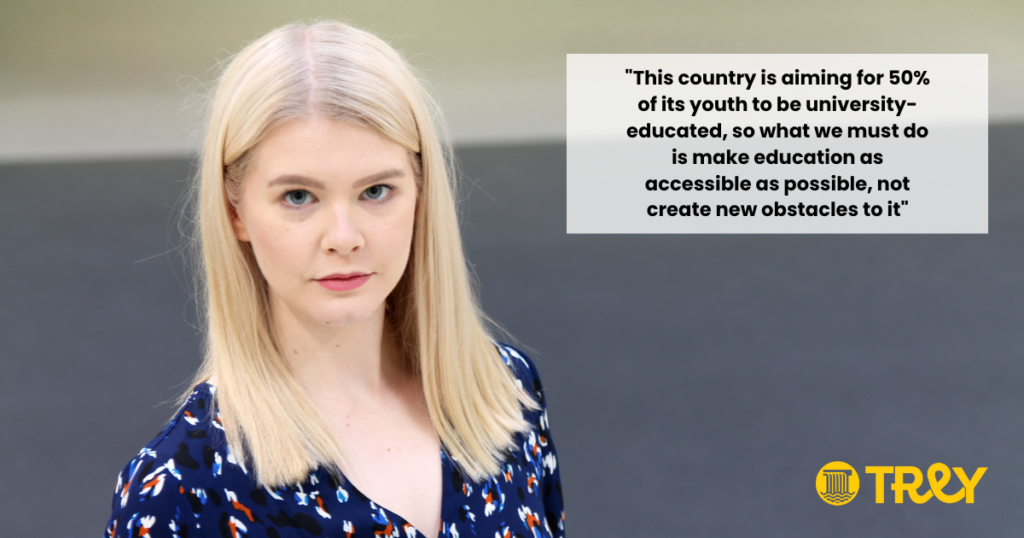 But why do people keep suggesting various ways of implementing fees into higher education?

Many think that a tuition fee would make students graduate faster which in turn would get them into the workforce quicker and make the number of university-educated people higher. Those in favour of tuition fees do not seem to consider that the fees might only make study times longer because studies would likely be funded by working at the same time. Working alongside one’s studies typically leads to late graduation.

Some also think that fees collected from students would be an effective way to increase university funding.  However, the economic advantage universities would gain from the fees is not as significant as one might think. A great deal of tuition-fee profits is used on stipends, granting exemptions from the fees, and on marketing expenses. That is, tuition fees or open university fees do not remotely compensate for the deficiencies in the core funding universities receive from the government.

Therefore free education is the best way to ensure everyone a chance at becoming as educated as they like. This country is aiming for 50% of its youth to be university-educated, so what we must do is make education as accessible as possible, not create new obstacles to it. Let’s keep making noise for free education, and let’s treasure educational equality!

The national Day for Free Education was established by the National Union for University Students in Finland, along with Finnish student unions, in order to highlight the importance of free education.