Our history and popular culture is full of real stories and storytelling adventures based on the social encounters and travel of characters. But what would happen to those stories be like if they were written here and now? What would have happened to The Seven Brothers, to Snow White and the seven dwarfs or perhaps to the twelve disciples if the current six-person gathering restrictions would have applied during their adventures? Or how short the Hobbit’s adventure in Middle-earth would have been if the Corona travel restrictions would have been in place?

And what would have happened to Hogwarts, if all the students had to be constantly locked in quarantine in their own sheaths or study entirely remotely from their homes? Had Harry, Ron, and Hermione ever bonded in the same way as they did, or would they ever become such powerful wizards and witches without all the challenges they faced in person? Or would Harry even have had to drop out of school when learning from home could have proven to be impossible?

These or other classic stories are unlikely to see any more retrospective plot changes or alternative endings, but perhaps the past year has inspired us to tell new kind of stories in the future. What kind of story could we tell in future about living in 2020: superhero of loneliness – or even everyday hero?

With new situations the world changes, the society changes, the culture changes and ideals change. But what about how us individuals? Do we change or do we adapt? The world around us has changed in a short time from communal culture to culture of loneliness. Before we were from culture to a culture of loneliness. Yesterday we talked about networking, today we work via net. Before the ideal student was expected to be active, to get to know fellow students and staff as well as participate in a wide range of events, developing their own skills. Today, the ideal student is expected to remain within the four walls, preferably alone. 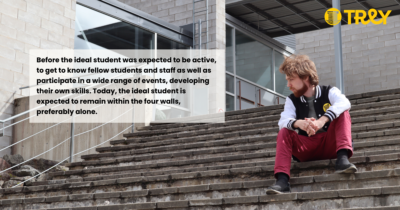 Student life is not something that only happens on weekdays between eight in the morning and four in the afternoon, but it is something greater and more comprehensive. Student life doesn’t go away on the weekends, not even during summer vacation. There is much more to student life than that. For many of us, student life overlaps with growing up at the same time, and sometimes these the two could almost be imagined as synonymous with each other. Many of us are moving for the first time to their own apartment and to another city as a result of their studies – moving from safe place towards unknown a bit like pioneers on a journey to discover new challenges and aspirations.

I thought recently that before I moved to Tampere I probably never spent even a week alone at home without family or friend contact, but during the last year, spending alone a week or two has been more the norm than the exception. If you have lived your whole life with family, and always seen your family and friends daily and weekly, the current situation can be very different. Suddenly spending time together has been more stigmatized. But if being together is to be avoided, and loneliness has become a new ideal, who will then teach us how loneliness should be treated? How should I feel when I’m alone  and what everyday life should look like nowadays? Can you learn it, and do you have to get used to it?

There has been a lot of talk in the media about the challenges of the event and cultural industries, and many of these well-known personalities and interest groups have raised their concerns. Theaters are empty, the festivals have been silenced and the stage lights have gone out. Anssi Kela wrote in February that he found himself working in a field that doesn’t matter so much now. Working in an industry whose operations were closed first, and opened last. But does Student Culture go to the same trash can.

The well-being of students includes at least mental and mental well-being, physical well-being, social well-being and economic well-being. Social well-being includes finding friends, attaching oneself to academia, networking, and also possibly finding a relationship. Studying is strongly related to finding your own place in the world of study and work, as well as in society at large. But how should we today grow our own networks, develop our own skills and prepare for work after encounters with both students and staff when the amount of events has reduced notably? Perhaps then, in a culture of loneliness, there is no longer a need for these things the future.

I look forward to the globally successful film trilogy whose main character is student who is fortified to their home, but who still manages to graduate in time without ever even visiting University physically once, to find their dream job and a loving relationship without ever meeting anyone, while staying healthy during the process. That would certainly be an immersive plot!