Elections are the best time of a person’s life. That’s what I’ve been telling myself for the past spring and regularly even before that whenever there were elections in sight. Voting and elections have always had that special something. They have inspired me to get into advocacy and even stand as a candidate four years ago.

This spring I’ve had the chance to be a part of the Student Union’s municipal elections campaign big time. During the campaign we’ve both met with candidates and planned communications, not to mention the countless planning meetings that have all led to this moment. I have talked about matters that are important to us students with different people who all have promised to remember us even after the elections. This we can evaluate during the next four years.

I think municipal elections might be my favourite elections. The decision-making of municipalities affects our everyday lives so concretely that it would be difficult not to care. I want more tramway. I want the city to be carbon-neutral by 2030. I want reasonably priced housing. All these things are decided in municipal councils. Tampere is already a good place to be, but for it to be a good place in the future as well, it is important to vote for a party that advocates for matters that are important to us students. To answer voting aid applications and research both municipal elections platforms and the promises of individual candidates. There is still time to vote on Sunday, as long as you remember to vote in the polling station mentioned in your polling card. And before that there is plenty of time to find the right candidate for you. 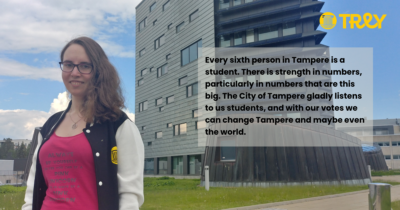 The voting turnout of young people and students is alarmingly low. In the municipal elections of 2017, the voting turnout of 18–24-year-olds was 35% (Source in Finnish: Allianssi, Tietoa Nuorten äänestysaktiivisuudesta). However, for example, in Tampere the largest age group is 20–29-year-olds (Source in Finnish: Statistics Finland, Väestön ikä- ja sukupuolirakenne 2020, kaikki alueet). In addition, every sixth person in Tampere is a student. There is strength in numbers, particularly in numbers that are this big. The City of Tampere also gladly listens to us students, and with our votes, especially our votes, we can change Tampere and maybe even the world.

This spring, I have fondly looked back at myself from four years ago. That young and eager Emmi who was standing as a candidate for the first time. It was at a different city at a different time of the world, but municipal elections remain. I owe much to my younger self. The spirit of advocacy never dies once it is awakened.