In addition to having your say on matters that are important to all students, as a council representative you will learn a huge deal. Because the Council decides on big matters like economics and vacant positions, the Representatives are familiarised with their role in order for them to make as informed decisions as possible. As a representative, you will have the support of your fellow representatives, the student union employees and Executive Board as well as the veterans of the previous Council, of course. As a representative, you get to learn about steering the activities and economics of a non-governmental organisation, its business activities and ownership steering, and its recruitment and the forming of advocacy goals. You will learn to argue for your views and give speeches, and you will grow as an advocate. 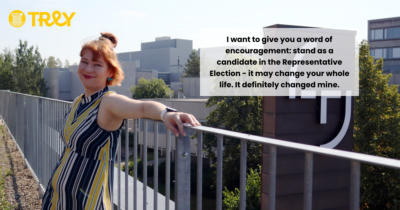 My background is in the University of Applied Sciences and its Students’ Union. I stood as a candidate in the Council election twice and was elected to the Tamko Council both times. In addition to those years teaching me a huge deal, they also led to me meeting my husband and creating life-long friendships. My experience in the Council and, later, on the Tamko Board also led the way to getting a job, because it was a key advantage when I applied for a position as the student union Specialist in Communications after graduating. So, I’m going to venture that I would be living a whole different life right now if I had not stood as a candidate in the Council election all those years ago. I want to give you a word of encouragement: stand as a candidate in the Representative Election – it may change your whole life.

My election slogan was “Pineapple belongs on pizza and I belong in the Council”. Feel free to use it!

– The author is the TREY Specialist in Communications and Advocacy who is grateful to her past self for filling in the candidacy announcement for the Council election in 2015.