”Roll your shoulders and turn your heads from side to side… then let’s go!” In a few seconds a couple of dozen association chairpersons, both old and new, have moved from a circle to imitating animals from different memes crawling on the floor or streching towards the ceiling. The question is: Who are members of the same species? The chairpersons of advocacy & student associations, or Syndikaatti as a group, are splitting into small groups in their December meeting.

A more usual day starts with the sharpening of tools. In an office that means starting up the computer and waiting for an array of updates to finish. After deducing that the world is still intact from the regular number of messages in my inbox, I’ll usually head to the kitchen to grab something hot, usually coffee or porridge, in the largest vessel in the cupboard. The days when I come to work early I’ll usually have the first hour for writing demanding instructions or blog texts without others around. At 10 the office is already buzzing and the slipping concentration drives me up from my desk. Usually this leads to getting more coffee – the bane of office work. My day usually contains a couple of meetings. The first of them has us working current issues with a small group and the other is spent planning, for example, the Organization Start.

Days as structured as these have been rare this autumn. 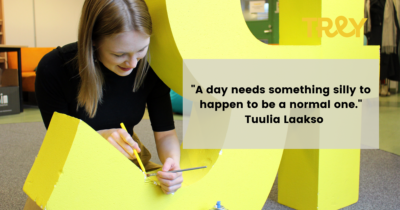 Once we came up with the idea of bringing pickles to a meeting, instead of the usual cookies or buns. On the way from Rakennustalo to Sähkötalo, this produced a theme song which was sung at the start of the meeting. I hope the club representatives have made their recovery. At least the pickles were eaten.

The past weeks a mystery has occupied the hallways on the campus. To quote Matti, the board member responsible for associations, it was this: ”What are Plörgis? How are Plörgis? Which one is Plörgis? Are Plörgis?”. PLÖRGIS, meaning the awards ceremony for associations, was organized in Hervanta about a week ago. It was a joy to give recognition to at least some of the people working in our magnificient student associations. The name of the event originated from ”Pikkujouluglögit” and ended up as Plörgis with a couple of iterations in between.

Having only two notes from a partner meeting never crossed my mind. The first is not worth mentioning. The second was this:

Consumed hot and with moderation. Based loosely on the recipe from Ravintola Tuhto.

Finally I roamed around Tampere city center in search for a particular Moomin board game. In the game, Stinky has spread trash all over the campus and the board member for campus development must see that these are cleaned up. After a careful placement of Post-it notes, Clean the Campus was selected as the name of the game.

It seems that this year a day needs something silly to happen to be a normal one. If a working environment as dynamic as this feels appealing, you’d better check the current matters section on our website. TREY has an opening for an event producer which offers a great way to become a part of the office community.

A wonderful Chrismas time to TREY and all its friends, and remember to rest during the holidays!