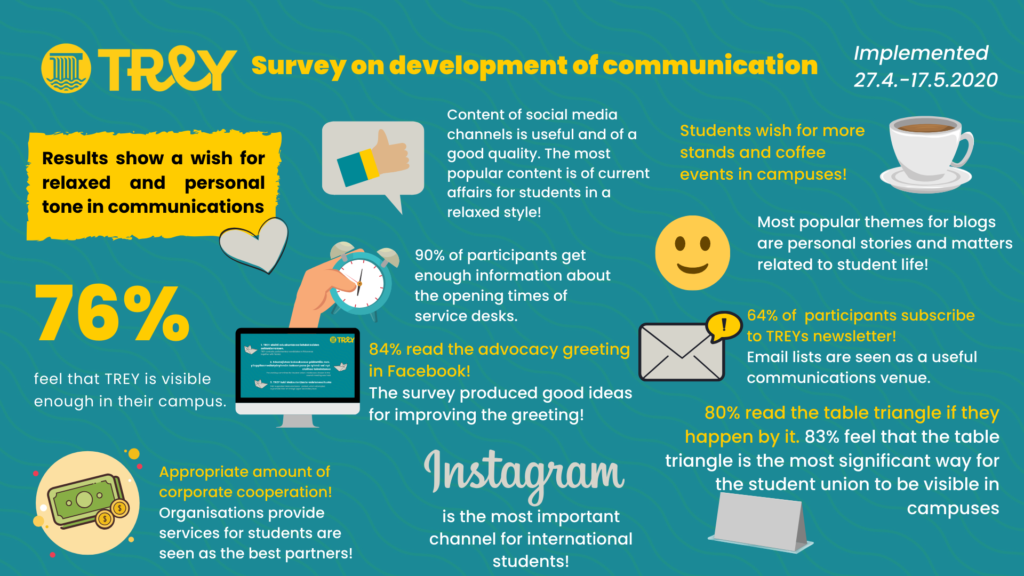 Instagram was the second most popular social media. Instagram is a growing social media, so we will invest in it further. 88% of those surveyed follow TREY’s Instagram stories. In the multiple-choice question, the Instagram content of the student union was viewed notably useful (85%), of good quality (50%) and equal (50%). The results of the survey reinforced our knowledge of the fact that Instagram is notably in the favour of international students.

TREY uses Twitter as an advocacy channel and communicates live about the council meetings, for example. In the multiple-choice question, the Twitter content of the student union was viewed notably useful (73%), of good quality (53%) and influential (53%). 72% of those surveyed think the student union publishes content on Twitter just the right amount (72%), on the other hand 27% of those surveyed think there should be more tweets. When asked what kind of content those surveyed would like to see in TREYs Twitter, 75% answered s

Finding information from TREYs website is mostly easy according to the survey (36% find the information to be easy to found, 57% say its easy to find most of the time and 7% say it is difficult to find information). There were wishes for more expansive site layouts, but unfortunately these have been found to result in worse website performance and reduced usability. Archiving of old news and blog texts was a shame according to the anserts and TREY has taken efforts to republish old articles. We will also focus on updating the website more frequently, especially the event calendar!

In the survey we asked if the respondents would like to receive information from the student union via a Telegram-channel. A channel in telegram is used for one-way informing, and you cannot respond to the messages in there. 59% of the respondents want a Telegram-channel and we will look into using this method of communications during the year 2021.

The survey charted student union’s and its brand visibility on campuses.

68% of respondents know where the student union new central office is located. The office moved during February 2020 from Hervanta campuses Rakennustalo building to a more visible place in Hervanta campuses main buildings floors 1 and 2.

76% of the surveys respondents feel that the student union is visible enough in their own campus. The amount of visibility should be added to Kauppi campus, especially via organising more events and association occasions there. Getting a service desk in Kauppi will also surely increase TREYs visibility in the campus. Responders oped for more relaxed visibility in campuses via for example stands and coffee events. Student media was also a desirable way for the student union to be present on campuses.

The best forms of student unions visibility in campuses were table triangles (83% of the respondents), different posters (78%), TREY-sheet which is in every campus (62%) and different events (53%). 80% read the student unions monthly table triangle when they happen by it in cafeterias, association spaces or lobbies. 10% of the respondents read it often and another 10% don’t read it at all. The table triangles will be developed into a more ecological for the year 2021 and the content of these triangles will be iterated upon based on the survey.

TREYs communications sector wants to thank all the participants of the survey! We got a lot of constructive feedback via which we can improve our work and make the student unions communications even better than before! Changes will be made gradually: in some communications channels the changes will be immediate, others will change in the autumn and yet others during the year 2021. Thank you to everyone who wanted to influence our communications and its development!