Around this time one year ago, I was feeling nervous. I had just clicked “send” and let my application for TREY’s board out of my own hands. The thought of a possible year on the board was exciting and terrifying at the same time. I would face a year-long break from studies and that definitely did not fit my five-year plan at the time.

I had always considered myself a very study-oriented person. I completed studies like items on a to-do list: in target time, with good grades and already looking at the next goal. For me, university was supposed to be just another check mark on that list. When I stepped through the doors of Hervanta Main Building in the fall of my fresher year, I was certain that I would graduate with a Master of Science in Technology in five years, maybe even faster. During those five years I would, in addition to two theses, take a couple new subjects, go on an exchange for half a year, preferably get my foot in the door of an interesting research group or company, participate in an innovation challenge and enjoy my student days. Sounds doable, right? I was a prime example of the mould that the Ministry of Education and Culture, universities and the working life want students to fit in. In my fresher year, I thought of the university as a machine that produces good workers with degrees after five years of refinement.

From my fresher year, I also remember the discussions I had with more seasoned students at the guild room. They had studied, yes, but they had also been chairs of associations, developed fresher activities, or left their mark on the board of the Student Union. I admired their drive to work for the guild, students, and all of the University but at the same time I was a little jealous. They had clearly succeeded in this game called university even though some of them had deviated from the rules I had set for myself (1. study, 2. graduate fast). They were living proof of the fact that one could make it at the university and at work even when one does something else than studies while they are a student.

How, then, did a study-oriented person like me find herself taking a year off from studies on the board of the Student Union after four years? The leading theme in my university game has always been chance and that plays a big role in this as well. You see, in the winter of my fresher year, I thankfully dared to join the board of my guild. I needed new hobbies when old ones had stayed in my former hometown, and guild activities seemed like a good option. This hobby turned into a passion during my second year on the board when I got into educational affairs and advocacy. It all happened like it happens to many: I gave association activities an inch and they took a considerable number of miles. I noticed I enjoyed solving advocacy cases and sitting in working groups. Last autumn, a friend of mine happened to ask the fateful question: “Have you considered applying for TREY’s board as an educational affairs organiser?”

During my fresher year and the discussions at the guild room, I did not yet realise that being at the university means a lot more than just studying. The university has indeed given me a lot of experience regarding mathematics, cell membranes, pipetting techniques, and the field of technology but at the same time it has given me so much more. Association activities and a year on the board of the Student Union have made it clear for me that I’m not, in fact, a study-oriented person. I’m a learning-oriented person. Because there is so much to learn outside of formal education as well. No lecture hall in my own field will teach me advocacy, encouragement, trust, giving feedback, growing as an expert, leadership or writing statements in the same way as this year at the Student Union has taught me. And the most interesting thing about this is that all of those are skills I will need to implement my 10-year plan. 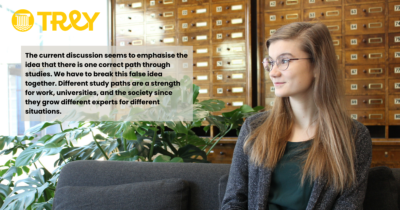 Recognising the skills learned outside of lecture halls is difficult, since the current educational system leans heavily on degree education. Titles like Master of Science in Technology, Master of Arts, Licentiate in Medicine or Economist symbolise the qualifications for different jobs. Don’t get me wrong, I definitely support degree education. However, the university field and working life must better understand that all skills needed for work and life cannot be learned on the wonky chairs of lecture halls. Learning is everywhere: In association facilities, sauna evenings, floorball practice. In student unions, student representative work, and the Council of Representatives. In political parties, committees, and voluntary organisations.

Universities have also started to realise this lately. The recognition of learning is possible through credit transfer practices. They allow the knowledge and skills gained elsewhere to be transferred into credits for a degree. The practice is very good and should be encouraged but even in this case, learning is considered significant only when it is stated in the degree, confirmed with credits. By filling out a form, I could seek around 10 credits to my free choice studies from association and student union activities. But there is still a problem. How could I ever be able to put into words the skills I’ve acquired during these few years for, say, potential employers?

It is sad that the higher education and support system doesn’t encourage students to increase other than skills from the studies. Study times have been cut, months of financial aid for higher education are extremely limited, and universities, thanks to the Ministry of Education and Culture, have a need to produce lots of degrees fast. The current discussion seems to emphasise the idea that there is one correct path through studies. If one deviates from that path, they automatically make a mistake that affects the state’s economy and their own future.

We have to break this false idea together. Right now. Different study paths are a strength for work, universities, and the society since they grow different experts for different situations. Even though my graduation is pushed forward by at least a year because of my year at the Student Union, I could never call this year a mistake. It was one of the best decisions I have made during my time at the University.

I wish that, in the future, no student would have to weigh their study choices as right or wrong. I do not want to hear from any more of my friends at the University how they value themselves and their skills only based on grades and completed study modules. I do not want to read from any more papers how students are scolded for whatever: graduation times, income, or summer holidays.

I want to challenge you to look again at the rules according to which you play this wonderful and exciting game called university. Do they help you play the game so that after graduation, on the finish line, you can look at the game board and say you wouldn’t change anything? If this self-reflection raises any doubts, I want to tell you this: just do it. Do the thing you would probably miss after you reach the finish line. Whether it be applying for the board of the Student Union, sending your first officer application, going for an exchange year, or changing fields. Just do it. Because it’s better to experience than be sorry.