As you can probably guess from the title, starting this text was left to the last minute. The intention was not to leave writing for the last few days, as my calendar had a reminder of a blog turn two weeks ago but look what happened. This made me wonder, for my part, why this happened once again.

Procrastination or postponing things is a common practice, especially among students. In studies, procrastination manifests itself in putting off doing tasks and projects or reading for exams and tests. Among other things, you can read more about procrastination on opiskelukoulu.fi website in Finnish, but on this page a phenomenon called ‘time inconsistency’ appeared in front of me and I started to study it further. You can probably already see where this led. Writing the blog postponed to a later time as I ended up deeper and deeper into the depths of the Internet, and after several articles on behavioural theories, I found myself in TikTok watching videos of procrastination. Even I don’t know how I ended up there, but at that point I realised that it’s about time to make a change. I went back to the beginning and followed the instructions “How to stop procrastination?”.

First, according to these guidelines, I had to think, “Why are you procrastinating? Is it, for example, that distractions make you lose your concentration, or does it feel like there is too much to do and you don’t know where to start?” I function better when there is noise around me that demands nothing from me. Netflix spinning in the background, music playing, or even listening to an audiobook makes me work more efficiently. We can clearly see that, of course, the problem cannot be in my ability to concentrate, so it must be in the workload. The people in our office can certainly tell you that the work will not run out. Moreover, perhaps in this fourth year on the Student Union payroll I’m starting to understand that, as one wise Student Union active once said, the world can be saved even after lunch. 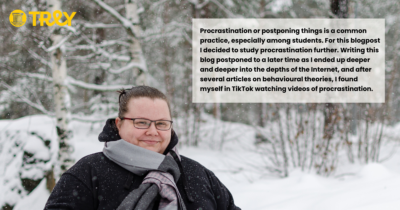 The second step was to think “In what situations do you put things off?”. During my studies, I already noticed that the things I postponed were usually the ones that didn’t affect others. Group work, presentations by several people and projects were always a priority. In association work, I was able to put off independent work and do common things first. This often also meant that my own tasks were then taken care of either late at night or in a great hurry. Helping others and working together is always more pleasant, because then you don’t have to toil away alone. Though at this point I have hopefully already realised that there must be a certain kind of balance between helping others and doing my own tasks.

“How do you procrastinate?” The next question made me think again about the series I have started on Netflix and the unfinished audiobooks. * Starts browsing audiobooks that have not been finished and puts one on in the background * Yes, as I tried to stop procrastination and followed the instructions, I started procrastinating. Maybe there is no simple answer to the question “how”. I have noticed that work is not the only thing I postpone, but also reading, cleaning, cooking, etc.

During the reflection on these three things, I came to the conclusion that I don’t really understand the reason why I procrastinate. However, I decided that I would better consider the postponement of things in the future and the aim is to reduce procrastination. I made my own plan based on the instructions of the previously mentioned opiskelukoulu.fi website:

I will start implementing this plan after Easter. Yes, I am going to postpone starting procrastination reduction. If you are one of us who procrastinate regularly, I challenge you to make your own plan and follow it. I already booked my next blog turn in about six months from this blog and at that time we can look back together how we have succeeded in following the plan during those six months.

In conclusion, I am going to quote another great thinker:

All we have to decide is what to do with the time that is given us.