TREY’s comment notes that Tampere University’s way of thinking and being will be built during the present decade. The strategy has been recently elaborated and its goal now is to define what is special until 2030 for Tampere University in particular. TREY considers it important to invest in the well-being of the whole community and in the building of a novel foundation university that does not compromise on the principles of education. “The representative value in the future university is social and ecological sustainability, acknowledged both in the degrees as in research”, the comment highlights.

“The commenting period given to the community was very short and it came by surprise. The chance to comment is an excellent example of the will to listen to the university community, but in the future, we hope for better anticipation and more time. I think it is important to genuinely listen to the whole community”, says Ville Jäppinen, the board member in charge of educational affairs.

The entire comment can be found below the article and here in the Statements section. 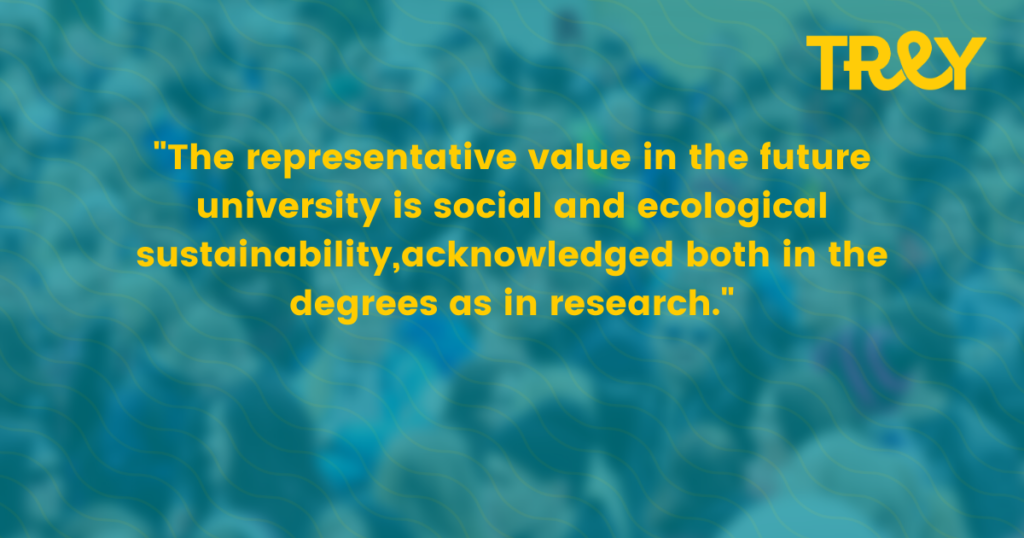 In TREY, we hope for a clearer presentation on the goals of the strategy. The strategy is the highest-level document guiding the university’s work: it creates a common will and direction for the whole university community. The four strategic goals presented in the strategy represent the areas that will be given particular weight for the decade. TREY considers the current mode of representation unclear as the actions within the four strategic goals are hard to indicate and to predict. The goal is to continue processing the strategy in the community, but it is unclear whether the strategy produces the tools to make changes and allocate resources.

TREY’s comments highlight two bigger themes that we hope will be emphasised in the strategy elaboration work. We students think that the university needs to be surrounded by a sound community to be able to work to solve the bigger challenges in society. New opportunities are created by educated people.

The university needs a sound community

The presented draft discusses the community and its tasks and relationship to the operatives outside the university in great deal. However, it does not clearly define what a university community in Tampere is like. University operations need to be interactive, participative and democratic and the administration needs to be open and transparent. We students hope that the breakthroughs the university pursues will be achieved in 2030 because the management of change and the operational culture will have been used to build a genuinely united and diverse university community that its members want to be a part of.

The diversity of fields and of community members creates different perspectives for the university, and it is important for the progress of science. We hope for a receptive culture of dialogue that encourages interaction inside the community and that promotes the capability to rise to the challenges of society. The university must promote the equal participation of people from all kinds of backgrounds in the science and education community. We want to see students, staff and professors participate in that community according to the tripartite principle.

The well-being of the community stems from real encounters. In the operational environment of our university, interaction is founded on care and respect. We are interested in the members of our community and in their well-being because the community feels well when its members feel well. Investing in the community ensures that the humanity mentioned in the strategy does not remain an empty phrase.

Educated people are the key

We students want to witness Tampere University find a new role by 2030 as a novel foundation university that does not compromise on the principles of education. The university values are open and independent science, research and education. The representative value in the future university is social and ecological sustainability, acknowledged both in the degrees as in research.

Science that genuinely understands and shapes societies requires a diverse community. The draft highlights well the university’s goal to create for its community members an arena to solve problems in society. The better we can tap into different perspectives and accept that there is no one way to do things, the more impressive we are. In 2030 Tampere University will still be a multidisciplinary university that recognises the value of different fields and different cultures as part of the science and education community. The future world is shaped by a diverse group of people.

The main value of the university’s open and independent science and education lies in its research-based operations that are based on critical evaluation and improvement of one’s own actions. The university community’s courage stems from not knowing the answers or results beforehand. In the strategy the success of the university cannot rest solely on courage. We also need room for failure and student-led operation.