The university community was able to comment on the report of the aforementioned working group. Individual people at the university, various groups, bodies, and representatives expressed their views through more than 200 comments on the report’s 18 proposals. The Student Union of Tampere University provided its own comments on the report and encouraged students and student associations to participate in the work. You can read TREY’s statement on the TREY website. Everything looked good and the work continued for the University’s Board, where in addition to the comments from the university community, the extracts of the report were legally assessed. 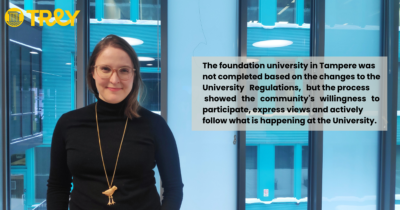 However, the changes show that the University has launched a dialogue on the organization, management system and Regulations of the University. Clarifications on the tasks and roles of the administrative bodies are important, even if they are only just starting the development measures. For example, other needs for change that were not mentioned in the working group’s report were missing from the process. For the future, I hope that all operators in the University will have a channel to take initiatives. The right of initiative would support active participation in common issues within the university community.

The foundation university in Tampere was not finished based on the changes to the University Regulations, but showed the community’s willingness to participate, express views and actively follow what is happening at the University. I would like to remind you that the central matter in universities as organisations is incompleteness. The tasks of universities are related to the search for new knowledge and educational aspirations. The constant desire to learn, to understand one’s own worldview and to reflect with other views are present in the daily lives of university people. I therefore expect the participation of the university community to be more strongly supported.