According to the Youth Barometer the lack of trust towards the future is related to climate change amongst Finnish youngsters. Three out of four of them are feeling insecure because of the global catastrophe.

Every once in a while there’s a “funny questionnaire” on Facebook, where people ask whether they should teach arabic numbers in Finnish schools or not. “Of course not, they should learn ours”, says the angry patriots not knowing that our numbers in fact are the arabic numbers.

I ended up reading a writing about the Communicable Diseases Act. The writer was absolutely terrified about the possibility of compulsory vaccinations in case of a critical epidemic. The writing said that the system is corrupted and therefore one cannot trust science. There was an attached link that led to a video about the vaccination conspiracy created by Bill Gates and WHO.

On Twitter there’s still a battle going on if blocking users is okay, even though harassment on social media is a common problem. If you can’t take the heat, get out of the kitchen, they say.

Fear. Some cannot trust the institutions and they fear “the power” is against them. They say regulating hate speech is an attack towards the freedom of speech. Some are afraid of other cultures, others climate change, corona or other people. It’s ok to be afraid, since one should always have a right to their feelings. It is a society’s duty to diminish fear and help its people in channeling it into more constructive actions.

The people I find most terrifying are the ones whose actions are guided by fear. I believe in the system, but someone might abandon their belief in it because of their fear. If they do that, they might stop sharing the same social norms as I, and that’s the scary part. Safety is one of the basic needs of every individual, and that should be everyone’s right guaranteed by the government.  Without the feeling of safety and security, one might start to seek safety by their own hand. That’s when their fear starts to flirt with hate. 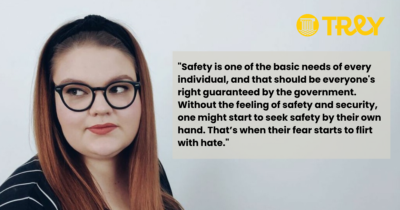 I guess no-one needs to be reminded what has happened in the past when fear and hatred were combined. I’m afraid that fear leads people to lose trust in each other and towards science-based democracy and decision making. That trust is much needed at this very moment during the corona-crisis. Strong democracy supported by science is the key factor for me to feel safe.

And now the day the powers of night is scorning

The government is the product of a social contract, whereas mutual feeling of illegitimate governance leads to anarchy. There’s no system if there’s no belief in it. Trusting the system, government and the independence of science isn’t the result of taking the Matrix’s blue pill, it’s the key element of a functional society.

I’m scared of exclusion, inequality and declining societal safety nets. Without representation and the feeling of capability to participate it is easy to feel excluded and forgotten, and that’s what makes it easier to lose trust toward society. That makes space for hatred. Fair generational politics, free education and strong social security make society more equal and prevent exclusion and people from becoming marginalized.

Beneath oppression’s yoke thou never liest

According to the Youth Barometer, trust and belief towards the future depends on one’s feeling of being able to make changes in the society. This is the reason to take actions to ensure a possibility to participate in democracy without fear. Our Council of Representative’s elections are coming, and we’re preparing ourselves – yes, you’re reading this right – to deal with nazis, since it wouldn’t be the first time to have to do that. We’re making all the efforts needed to ensure a safe and peaceful election, where no-one needs to fear being harassed.

I’m asking all of you to participate in making our society a safer place, so that everyone can have faith in the future and confidence to affect and make their voices heard.

Chair of the board