TREY was contacted by students from our community on Monday 2 March with the request to support their statement. In the statement, they call for Fortum’s Annual General Meeting to commit to the Paris Agreement. According to Fortum’s Board of Directors, the science-based plan to reduce emissions is not possible at the moment, so the AGM will not commit to the Paris Agreement. Students have produced a statement together with Coal-free Finland, WWF and Greenpeace. TREY’s Executive Board decided in its meeting on Thursday 4 March to support our students’ statement. In addition, the statement is supported by the student unions of Jyväskylä, Helsinki, Vaasa, Turku, Oulu and Uniarts Helsinki as well as the National Union of University Students in Finland.

Together with our students and the other student unions, we want to appeal to all Fortum shareholders, especially to Minister for Ownership Steering Tytti Tuppurainen, for the AGM to commit to the Paris Agreement and to promote a climate policy that is fair to future generations. The Minister for Ownership Steering will vote in the AGM on behalf of the State of Finland, Fortum’s majority owner. Finland has signed the Paris Agreement – it has to be shown in concrete climate goal supporting decisions!

Climate issues are present in all student union activities. “It’s great that our students have taken the initiative to influence these matters and challenged the whole student movement to join!  We want to appeal to Minister for Ownership Steering Tytti Tuppurainen together with our students and in that way encourage our entire student community to be active citizens and participate in climate activism. The student union has a statutory duty to prepare students for active, informed and critical citizenship, so our decision here comes naturally. remarks student union’s chair Annika Nevanpää. 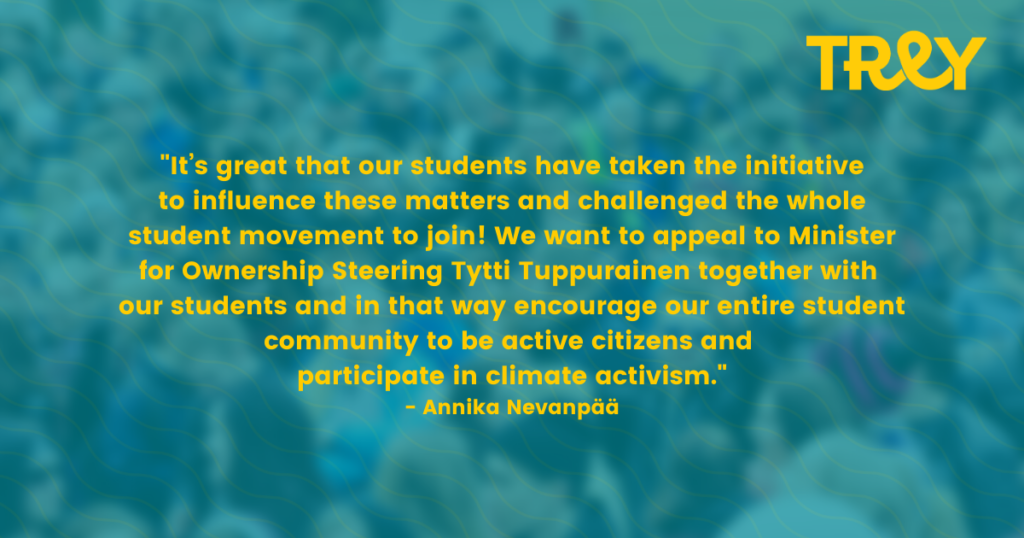