Did you know that TREY has decided on a goal to be carbon neutral by 2025? This goal is documented both in the policy paper and the environment programme. This goal is admirable and in accordance with wider trends; everyone from the Finnish government to local community organizations are setting carbon neutrality goals for future years and decades. In addition to great speeches and promises, there is a need for concrete actions and will to execute those promises.

One of TREY’s most concrete actions to achieve carbon neutrality has been hiring me as a thesis worker. I’m an environmental engineering student and I got to start my thesis at TREY in the beginning of August. My topic is organizational carbon footprint calculations. So, in the coming months, my job is to calculate the carbon footprints of TREY’s first operating years, and from these results I will create a roadmap to carbon neutrality. 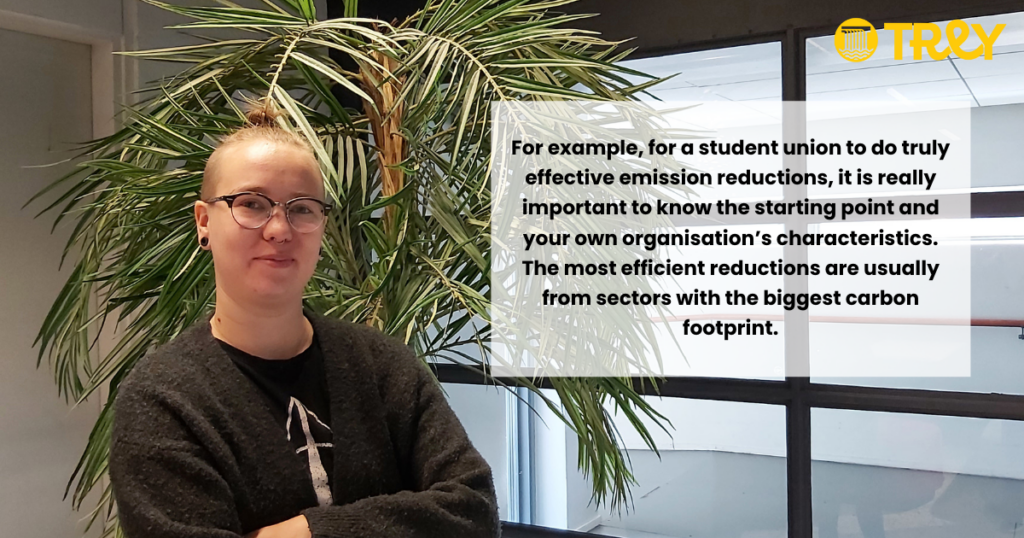 To put it simply, a carbon footprint describes how much emissions are caused by an organisation’s activities. For example, for a student union to do truly effective emission reductions, it is really important to know the starting point and your own organisation’s characteristics. The most efficient reductions are usually from sectors with the biggest carbon footprint. For the student union, these sectors could for example be the energy consumption of our office spaces, or travelling. These assumptions are confirmed only by finishing the calculations I am making.

Someone might now be wondering that the student union is not a big or polluting operator, shouldn’t we be focusing on something more impactful? I do agree on the fact that everyone should inspect their own emissions critically, but in no way do I think that the student union, or any other small operator, would be too insignificant to be a part of solving global warming. The power of leading by example is real, and it should be used whenever possible. For example, the student union can educate student associations, and these associations can encourage their members to act more sustainably. The members can then inspire their loved ones and friends. This way, the impact of a small project can suddenly grow into much bigger proportions.

p.s. I will be writing about being a thesis worker at the student union later, so if you are interested in that topic, stay tuned!