The universities in Finland have been around for decades. In fact, the oidest – the University of Helsinki – has been around for centuries. For many years, students have been educated to become experts in their own fields by offering research-based higher education, and at the same time they have been raised to serve their homeland and society. After all these years, what is the role of the students in the university community, and particularly in the administration of the university?

The tripartite approach has not always been in use. Even before the 1970s, the student movement had been advocating for a renewal of the universities’ administration model and stronger participatory power for the students. At the turn of the 1960s and the 1970s, the student movement and, among others, president Urho Kekkonen seeked to promote the controversial “one person, one vote” principle. According to this principle, each member of each university community group would be on an equal footing in the universities’ administrative elections. The model in question would therefore have signified a considerable opportunity for the students, as they are by far the largest community group in the universities. Hence, they would have potentially received the majority of the power. According to some sources, Tampere University has approximately 5,000 staff members who belong to the community and approximately 20,000 students. All of us can certainly imagine how much different the university’s administrative bodies would look if the “one person, one vote” principle had become the practice. Much to everyone’s surprise, this model was criticised in universities and the parliament alike, and in the end the bill was not approved.

Despite all the efforts, the universities finally underwent an administrative reform into a tripartite model. As a result, each community group was ostensibly given a third of the voting power. Later on, at the end of the 1990s, an administrative change was made, which enabled inviting external members onto the universities’ boards of trustees. External members from outside the community operating on the board are believed to bring in viewpoints on international activities and expertise in various sciences and arts, as well as social and economic life. Currently the board of a foundation university in particular does not legally require the representation of the university’s community groups. Although at the moment our board of trustees does include people operating within our university community, this may not be the case in, say, five years. It remains to be considered whether our university’s current approaches take the various operators in our community into account if there are no representatives from the community on the board in the future.

So where does this leave the students? Student representatives in the administration (hallopeds) are members of the community who represent the students in the multi-member working groups. At the moment they operate on the Academic Board, councils making preparations for it, faculty councils and degree programme planning groups, to name a few. In these multi-member groups student representation is often scarce compared to the number of staff representatives. This can be seen, for example, in the way only faculty councils have balanced tripartite representation, i.e. an equal number of representatives from each of the three groups. This state of affairs does not enable each community group to have a third of the voting power, which was the original aim of the tripartite model. 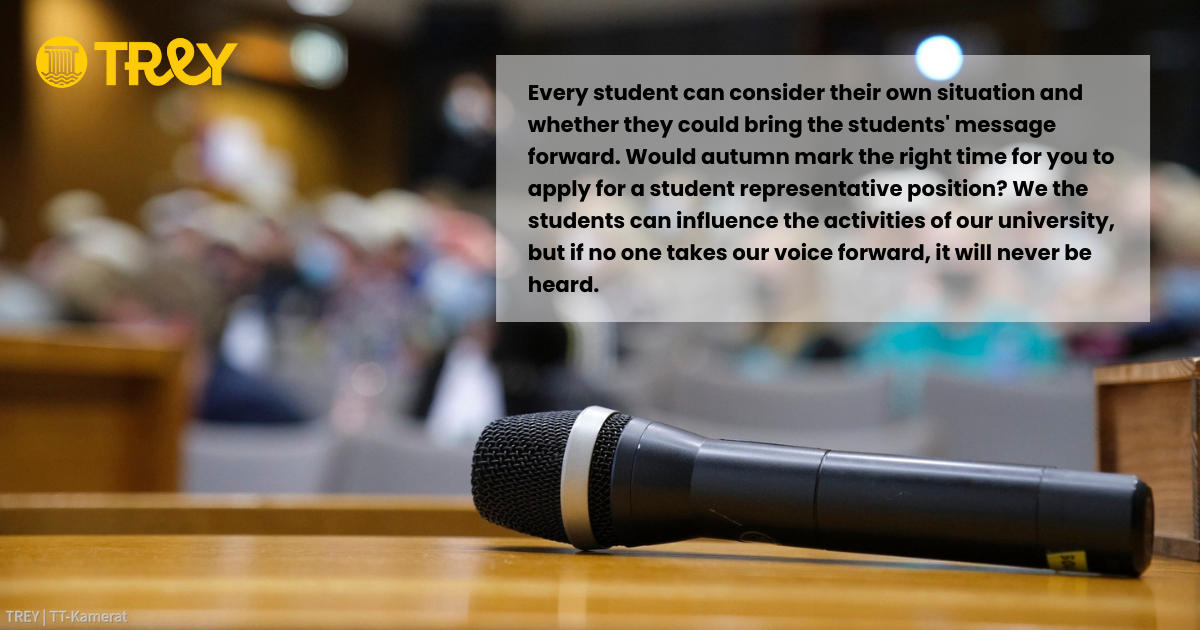 TREY’s Policy Paper presents our student union’s view on the structure of the administration: ”The multi-member bodies of the University, with the exception of the Board, have balanced tripartite representation and deputy members.”. In addition to this, we feel that the University’s Board of Trustees would benefit considerably from tripartite representation. The students are the largest group in our university and often most in touch with the day-to-day activities. While not every student knows what is going on financially or all the decisions made in the University, it does not mean that the largest group in the community can be undermined in the decision-making. The students’ expertise as well as the educational know-how of the rest of the community should be more clearly and equally visible in the decision-making. However, for example on the Academic Board the students are clearly underrepresented at the moment, as the lineup includes eight professors, six representatives of the middle group and five students, and there are no deputy members.

Every student can have a say in the position of the students in the university. There is a wealth of opportunities to make a difference, and it does not mean that you will have to spend a great deal of time on it. Participation in discussion meetings and association advocacy, giving feedback on teaching and other activities, as well as numerous other influencing opportunities are important, and students should be seen in these places. The Student Union promotes the students’ interests in our university community, but there is a group of operators that gets attention far too rarely: the hallopeds. Hallopeds, the student representatives, are influencing the administration of our University and making the Academic Board, among others, aware of students’ views. Their work on behalf of all students is valuable and deserves a tip of the hat.

There can never be too many student representatives, and even now there are open positions for newcomers in numerous working groups. Right now, us in the Student Union are looking at the halloped megasearch taking place in the coming autumn. The goal is once again to find people to fill all the student representative positions for the following two years. Hopefully every student will consider their own situation and whether they could bring the students’ message forward. Would autumn mark the right time for you to apply for a student representative position? We the students can influence the activities of our university, but if no one takes our voice forward, it will never be heard.